God gave me a pioneering ministry in The Arsenal of Fire to raise up radical fire starters or torchbearers who will carry His manifest fire and glory to put God on display for the world. 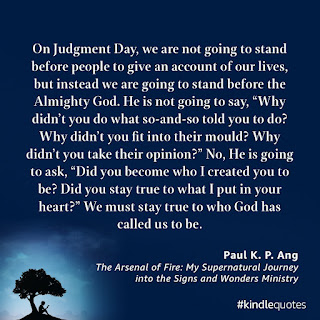 He places a very high standard and requirement for this unique calling, which very, very few in this world can achieve in order to host this evidential treasure of carrying His manifest glory.

The following verses illustrate God’s requirements for His divine calling.

“I tell you the truth,” Jesus said to them, “no one who has left home or wife or brothers or parents or children for the sake of the kingdom of God will fail to receive many times as much in this age and, in the age to come, eternal life.”

We each have different calling in the Body of Christ. As disciples of Christ, each of us should know our own calling and we should also ask God to teach us His way for our calling. We should not seek the opinions of others, just as like what Kenneth Hagin did, and almost caused him his life.

“Teach me Your way, Lord

That I may rely on Your faithfulness

Give me An undivided heart

That I may fear Your name”

“If you are pleased with me, teach me your ways so I may know you and continue to find favour with you. Remember that this nation is your people.”

“For My thoughts are not your thoughts,

Nor are your ways My ways,” says the LORD.

For as the heavens are higher than the earth,

So are My ways higher than your ways,

And My thoughts than your thoughts.”

When I shared this testimony of Kenneth Hagin to 40 pastors in a seminar in China in 2018 about the standard that God set for His disciples which is to place God first above family, most of the pastors began trembling on their seats under the fear of the Lord. The host’s wife angrily stormed out of the meeting, as the message had specifically spoken to her.

Kenneth E Hagin was one of the most influential American Pentecostal preachers who was often referred to as 'the Grand Daddy of the Word of Faith Movement.'

Diagnosed with "a deformed heart and an incurable blood disease" from birth, Hagin was partially paralyzed by age 15, confined to bed, and was told he had little time to live.

In April 1933, his heart stopped beating, and his other vital signs failed three times. In each of these instances, Hagin said he felt himself being dragged to hell. In the third instance, he prayed for Christ's help and forgiveness—and came back to life. He died at the age of 86 in 2003.

Suddenly my heart stopped beating and I fell from my chair to the floor! I became as cold as ice all over my body. I had been dead twice when I suffered with heart trouble at the age of sixteen, so I knew when death came over me this time.

They carried me to the parsonage and summoned my wife from the woman's Sunday school class. As soon as she came into the room she knelt beside my bed and wept, Ï feel this is all my fault.

Then she told me she had been complaining to the Lord about my long absence from home. She never had mentioned a word of it to me. However, she said that one day as she was washing dishes, she had heard a voice saying, I could take him away where he could never come back. 'She was startled, but dismissed it as her imagination playing tricks on her. Kneeling beside his bed she prayed this prayer of submission: 'Lord, if You will just spare my husband, I don't care how long he is gone or where he goes in Your will. I will not complain about it again.’

Then the Lord showed me where I had missed it too. When we had made a new consecration to the Lord to do His will, whatever it might be, we too can be instantly healed and made completely well.

How did I get into that predicament? Instead of listening to God and putting His Word first, I had sought the advice of various pastors. All they could give me was natural counsel. They had said, 'Your first obligation is to your family. You have small children and you should be home with them. You shouldn't be out in the field.' One preacher after another told me that; so I took their advice. I tried to do what they had suggested: to do what I wanted to do in the natural - and I nearly died.

I finally learned that a man can fulfill his obligations to his family and still obey God."

Billy Graham’s daughter shared that her earthly father was away from home, approximately 60 percent of his children’s growing-up years.