The Rise of the Torchbearers - by Daneen Bottler

“There is a great transitioning happening in the Kingdom of God right now. We are witnessing along with the great cloud of witnesses, the appointed time of passing of the torches. There is a new set of torchbearers that have been raised up, those that have been set apart, trained and are pure in heart. This new company of torchbearers are about to be revealed and positioned for receiving the greatest honor of carrying the torches of the weighty glory and fire of the Lord.

You will recognize these torchbearers because they will be marked as catalysts bringing the pure powerful fire of God into the darkest of places. They will lead Believers on the narrow path. They won't make excuses or walk with hidden agendas, but with hearts laid bare, they will illuminate the way of the Lord and ignite the hearts of the nations with the fire of God.

"Arise torchbearers, take your place in the great race! The time for the handoff has come. Fear not, for I the Lord, have honored you by choosing to bring you now to the forefront. I Am, is with you."

"Your hidden season is over. Your training in the fire has been completed and now having been tested and approved, you will carry the weight and greater measure of My glory fire to the nations. You will ignite every heart in your path and awaken My people with My glory fire, says the Lord Almighty. For I have commissioned you to lead and mobilize My people into this new season of My greater glory!"

A True Disciple of Jesus Christ.


The mark of a true disciple of Christ is the manifest presence of His glory, and is one who has been set apart and fully surrendered his life, consecrated for His use (2 Timothy 2:20-21, Romans 12:1)

2018 is the beginning of a new wave of God’s glorious move - the 4th wave of the Holy Spirit with rapid fire and quick ignition to deliver, heal and transform lives - “For the earth will be filled with the knowledge of the glory of the LORD as the waters cover the sea” Habakkuk 2:14. 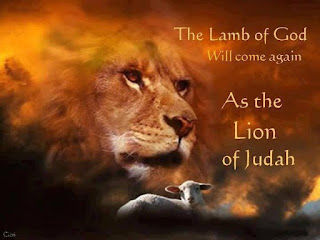 To fulfil Habakkuk 2:14, the Lord has birthed end-time ministries and one is the Arsenal of Fire Ministries -sending both of us under the anointing of the Lion & Lamb to carry His fire and glory, putting us on display to wake up His sleeping churches. This  is to demonstrate what God is doing in these last days with His fire and glory that ‘no eye has seen, no ear has heard.” Praise God!

Our work with Him is to raise His end-time warrior brides-a unique and powerful breed, a company of anointed believers who are unstoppable. God will cleanse and purify this breed who will rise up and will not seek after man’s rewards, favour or approval. These precious ones are dedicated and set apart solely for His holy purpose. They will respond with full obedience to God's voice and they will not fear man. They will only serve one Master and they will not serve mammon, fame and fortune.

When they speak, they will proclaim the oracles of God with signs and wonders following. Many religious leaders and Christians will be offended by this group. God will lift these anointed ones to uncover and expose the deceitful religious systems that are hidden in the church. This group will not trust in their own righteousness but they will walk with a powerful anointing - cleansed and purified by the fire of God and they will be so drawn to their first love – Jesus Christ, totally consumed by the love of God, which conquers all. The love and compassion of Jesus Christ will come upon them and they will minister with the heart of God that will “bind up the broken-hearted; open the eyes of the blind; set the captives free; and deliver those in bondages.” (Isaiah 61). They will endure much for His Name's sake, being persecuted, rejected, accused, abused, misjudged and forsaken. But the glory of God will shine through them as promised: "To them God willed to make known what are the riches of the glory of this mystery among the Gentiles: which is Christ in you, the hope of glory (Colossians 1:27).

John Wesley wrote:- “Give me one hundred preachers who fear NOTHING but sin, and desire NOTHING but God, and I care not a straw whether they be clergymen or laymen; such alone will shake the gates of hell and set up the kingdom of heaven on Earth.”

Every disciple is a believer but not every believer is a disciple. It is a personal choice. If every believer chooses to be a disciple, we can easily and rapidly win the world for Jesus. This is the truth but hardly any preacher is bold enough to preach such a message for fear of upsetting and losing his congregation. 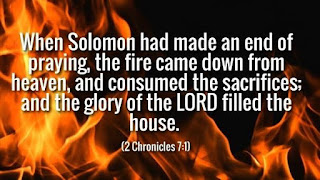 The Fire and glory of God are inseparable. Before the glory of God can fill the temple, the fire of God will first come to cleanse and purify the temple.

A man of God wrote: “We must rightly divide the Word of truth. This verse, “Behold, I stand at the door and knock” (Rev. 3:20), has nothing to do with sinners and a waiting Saviour. No! It illustrates the tragic picture of our Lord at the door of His own Laodicean Church trying to get in. Imagine it! Yet again, in most prayer meetings, what text is more often used than “Where two or three are gathered together in My Name, there am I in the midst”? Too often He is not in the midst; He is still at the door, waiting. We sing His praises, but shun His person!”

William Booth wrote:- “The greatness of a man’s power is the measure of his surrender.”

Can God entrust us to carry His fire and glory if we are not willing to fully surrender and consecrate our life to Him for His use?

What is a fully surrendered life?

Our Lord Jesus exemplifies this in Mathew 12:46-50.
“While Jesus was still talking to the crowd, his mother and brothers stood outside, wanting to speak to him. Someone told him, “Your mother and brothers are standing outside, wanting to speak to you.” He replied to him, “Who is my mother, and who are my brothers?” Pointing to his disciples, he said, “Here are my mother and my brothers. For whoever does the will of my Father in heaven is my brother and sister and mother."

Matthew 19:29 (NKJV), “And everyone who has left houses or brothers or sisters or father or mother or wife or children or lands, for My name's sake, shall receive a hundredfold, and inherit eternal life.”

Matthew 19:12
For some are eunuchs because they were born that way; others were made that way by men; and others have renounced marriage because of the kingdom of heaven. The one who can accept this should accept it.”

Anything we value above God is considered idolatry (Matthew 22:37, Rev 3:15-16). Abraham placed God above his most beloved only son, Isaac, by obeying God's command to sacrifice him. Abraham obeyed because he feared the Lord and God put him to a test.

Revelation 3:16, "So, because you are lukewarm–neither hot nor cold–I am about to spit you out of my mouth."

I am called to preach the last-days message, which in itself is offensive to most believers, whose hearts are still entangled with worldly things. One thing we must realize is that the most effective way of solving this problem of loving the world is not by removing worldly things, but by delivering the heart from the grip of worldly things.

D. L. Moody had said, "The world has yet to see what God can do through a man who is totally surrendered to Him.”

His fire and glory will rapidly change the world to fill the whole earth with His glory. Habakkuk 2:14.