Prophets had prophesied that Trump would be the next elected president. How could that be possible when all odds were against him?

Trump lost the presidential debates and the public opinion polls to Hillary by double-digit margins. All living former American presidents had opposed him; renowned celebrities and entertainers mocked at him; top party power brokers deserted him and all forms of global public opinion ridiculed him. 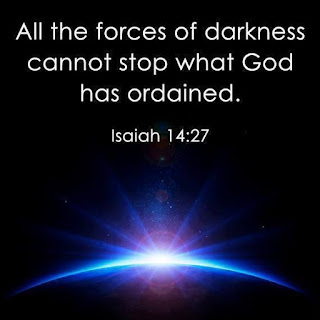 Trump had neither military experience, nor the experience of a politician or a diplomat; yet despite being surrounded by enemies, Trump won the election. These enemies have been so humiliated by Trump's winning that their lies about Trump are being exposed in the media globally, reaping what they have sown.


The large amount of monies that Trump's enemies used to discredit and slander Trump had no effect as God turned and changed all situations around for Trump to triumph.

If God is for Trump, who can be against him? (Romans 8:31). Who will bring any charge against those whom God has chosen? It is God who justifies (Romans 8:33).

God can use our enemies to promote us just like He used Goliath and not King Saul, to exalt David. David was just a kid with nothing but he became very famous after killing Goliath. This is God's humour and His foolishness is wiser than man's wisdom, and the weakness of God is stronger than man’s strength (1 Corinthians 1:25).

Sometimes, God may use these "Joseph' or Trump' experiences" to strengthen you and prepare your readiness to work with Him. Joseph was sold to Egypt as a slave by his jealous brothers to serve God's plan and purpose for his high calling.

If you are now facing a similar situation, rejoice for God is preparing your readiness to work with Him for His glory.